This tutorial demonstrates how to implement a deep reinforcement learning (RL) agent from scratch using a policy gradient method that learns to play the Pong video game using screen pixels as inputs with NumPy. Your Pong agent will obtain experience on the go using an artificial neural network as its policy.

Pong is a 2D game from 1972 where two players use "rackets" to play a form of table tennis. Each player moves the racket up and down the screen and tries to hit a ball in their opponent's direction by touching it. The goal is to hit the ball such that it goes past the opponent's racket (they miss their shot). According to the rules, if a player reaches 21 points, they win. In Pong, the RL agent that learns to play against an opponent is displayed on the right. 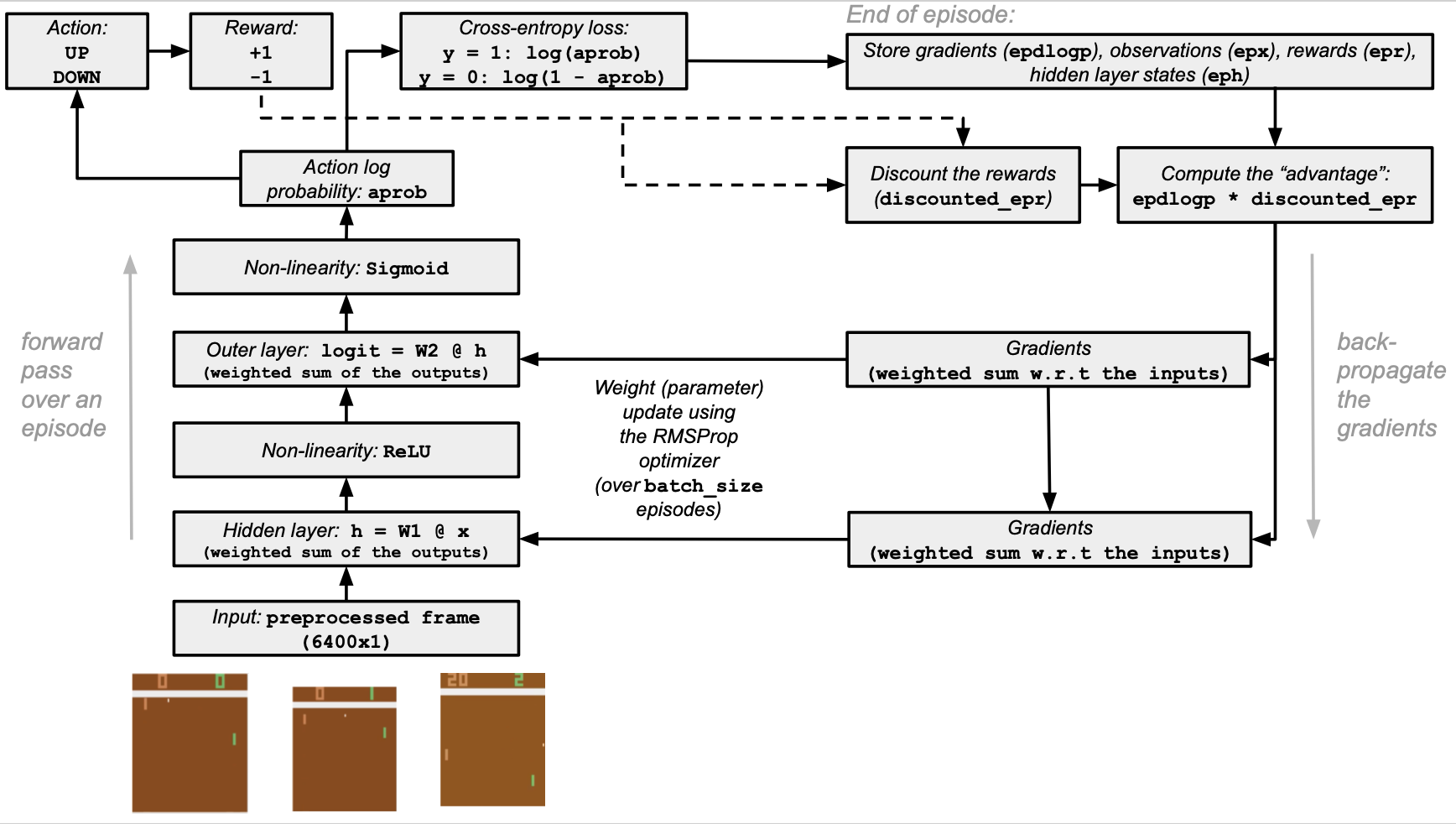 This example is based on the code developed by Andrej Karpathy for the Deep RL Bootcamp in 2017 at UC Berkeley. His blog post from 2016 also provides more background on the mechanics and theory used in Pong RL.

This tutorial can also be run locally in an isolated environment, such as Virtualenv and conda.

A note on RL and deep RL

In RL, your agent learns from trial and error by interacting with an environment using a so-called policy to gain experience. After taking one action, the agent receives information about its reward (which it may or may not get) and the next observation of the environment. It can then proceed to take another action. This happens over a number of episodes and/or until the task is deemed to be complete.

For detailed information about RL, there is an introductory book by Richard Sutton and Andrew Barton.

Check out the Appendix at the end of the tutorial for more information.

Below is a concise glossary of deep RL terms you may find useful for the remaining part of the tutorial:

You will train your Pong agent through an "on-policy" method using policy gradients — it's an algorithm belonging to a family of policy-based methods. Policy gradient methods typically update the parameters of the policy with respect to the long-term cumulative reward using gradient descent that is widely used in machine learning. And, since the goal is to maximize the function (the rewards), not minimize it, the process is also called gradient ascent. In other words, you use a policy for the agent to take actions and the objective is to maximize the rewards, which you do by computing the gradients and use them to update the parameters in the policy (neural) network.

1. First, you should install OpenAI Gym (using pip install gym[atari] - this package is currently not available on conda), and import NumPy, Gym and the necessary modules:

Gym can monitor and save the output using the Monitor wrapper:

2. Instantiate a Gym environment for the game of Pong:

3. Let's review which actions are available in the Pong-v0 environment:

There are 6 actions. However, LEFTFIRE is actually LEFT, RIGHTFIRE — RIGHT, and NOOP — FIRE.

For simplicity, your policy network will have one output — a (log) probability for "moving up" (indexed at 2 or RIGHT). The other available action will be indexed at 3 ("move down" or LEFT).

4. Gym can save videos of the agent's learning in an MP4 format — wrap Monitor() around the environment by running the following:

While you can perform all kinds of RL experiments in a Jupyter notebook, rendering images or videos of a Gym environment to visualize how your agent plays the game of Pong after training can be rather challenging. If you want to set up video playback in a notebook, you can find the details in the Appendix at the end of this tutorial.

In this section you will set up a function to preprocess the input data (game observation) to make it digestible for the neural network, which can only work with inputs that are in a form of tensors (multidimensional arrays) of floating-point type.

Your agent will use the frames from the Pong game — pixels from screen frames — as input-observations for the policy network. The game observation tells the agent about where the ball is before it is fed (with a forward pass) into the neural network (the policy). This is similar to DeepMind's DQN method (which is further discussed in the Appendix).

Pong screen frames are 210x160 pixels over 3 color dimensions (red, green and blue). The arrays are encoded with uint8 (or 8-bit integers), and these observations are stored on a Gym Box instance.

In Gym, the agent's actions and observations can be part of the Box (n-dimensional) or Discrete (fixed-range integers) classes.

2. You can view a random observation — one frame — by:

(You can refer to the OpenAI Gym core API for more information about Gym's core classes and methods.)

To feed the observations into the policy (neural) network, you need to convert them into 1D grayscale vectors with 6,400 (80x80x1) floating point arrays. (During training, you will use NumPy's np.ravel() function to flatten these arrays.)

3. Set up a helper function for frame (observation) preprocessing:

4. Preprocess the random frame from earlier to test the function — the input for the policy network is an 80x80 1D image:

Create the policy (the neural network) and the forward pass

Next, you will define the policy as a simple feedforward network that uses a game observation as an input and outputs an action log probability:

1. Let's instantiate certain parameters for the input, hidden, and output layers, and start setting up the network model.

Start by creating a random number generator instance for the experiment (seeded for reproducibility):

In a neural network, weights are important adjustable parameters that the network fine-tunes by forward and backward propagating the data.

2. Using a technique called Xavier initialization, set up the network model's initial weights with NumPy's Generator.standard_normal() that returns random numbers over a standard Normal distribution, as well as np.sqrt():

3. Your policy network starts by randomly initializing the weights and feeds the input data (frames) forward from the input layer through a hidden layer to the output layers. This process is called the forward pass or forward propagation, and is outlined in the function policy_forward():

Note that there are two activation functions for determining non-linear relationships between inputs and outputs. These non-linear functions are applied to the output of the layers:

Set up the update step (backpropagation)

During learning in your deep RL algorithm, you use the action log probabilities (given an observation) and the discounted returns (for example, +1 or -1 in Pong) and perform the backward pass or backpropagation to update the parameters — the policy network's weights.

Using the intermediate hidden "states" of the network (eph) and the gradients of action log probabilities (epdlogp) for an episode, the policy_backward function propagates the gradients back through the policy network and update the weights.

2. When applying backpropagation during agent training, you will need to save several variables for each episode. Let's instantiate empty lists to store them:

You will reset these variables manually at the end of each episode during training after they are "full" and reshape with NumPy's np.vstack(). This is demonstrated in the training stage towards the end of the tutorial.

3. Next, to perform a gradient ascent when optimizing the agent's policy, it is common to use deep learning optimizers (you're performing optimization with gradients). In this example, you'll use RMSProp — an adaptive optimization method. Let's set a discounting factor — a decay rate — for the optimizer:

4. You will also need to store the gradients (with the help of NumPy's np.zeros_like()) for the optimization step during training:

In this section, you will set up a function for computing discounted rewards (discount_rewards()) — the expected return from an observation — that uses a 1D array of rewards as inputs (with the help of NumPy's np.zeros_like()) function.

To provide more weight to shorter-term rewards over longer-term ones, you will use a discount factor (gamma) that is often a floating-point number between 0.9 and 0.99.

Train the agent for a number of episodes

This section covers how to set up the training process during which your agent will be learning to play Pong using its policy.

The pseudocode for the policy gradient method for Pong:

You can stop the training at any time or/and check saved MP4 videos of saved plays on your disk in the /video directory. You can set the maximum number of episodes that is more appropriate for your setup.

1. For demo purposes, let's limit the number of episodes for training to 3. If you are using hardware acceleration (CPUs and GPUs), you can increase the number to 1,000 or beyond. For comparison, Andrej Karpathy's original experiment took about 8,000 episodes.

2. Set the batch size and the learning rate values:

3. Set the game rendering default variable for Gym's render method (it is used to display the observation and is optional but can be useful during debugging):

6. Initialize the reward variables and the episode count:

7. To simulate motion between the frames, set the single input frame (x) for the policy network as the difference between the current and previous preprocessed frames:

8. Finally, start the training loop, using the functions you have predefined:

You may notice that training an RL agent takes a long time if you increase the number of episodes from 100 to 500 or 1,000+, depending on the hardware — CPUs and GPUs — you are using for this task.

Policy gradient methods can learn a task if you give them a lot of time, and optimization in RL is a challenging problem. Training agents to learn to play Pong or any other task can be sample-inefficient and require a lot of episodes. You may also notice in your training output that even after hundreds of episodes, the rewards may have high variance.

In addition, like in many deep learning-based algorithms, you should take into account a large amount of parameters that your policy has to learn. In Pong, this number adds up to 1 million or more with 200 nodes in the hidden layer of the network and the input dimension being of size 6,400 (80x80). Therefore, adding more CPUs and GPUs to assist with training can always be an option.

You can use a much more advanced policy gradient-based algorithm that can help speed up training, improve the sensitivity to parameters, and resolve other issues. For example, there are "self-play" methods, such as Proximal Policy Optimization (PPO) developed by John Schulman et al in 2017, which were used to train the OpenAI Five agent over 10 months to play Dota 2 at a competitive level. Of course, if you apply these methods to smaller Gym environments, it should take hours, not months to train.

In general, there are many RL challenges and possible solutions and you can explore some of them in Reinforcement learning, fast and slow by Matthew Botvinick, Sam Ritter, Jane X. Wang, Zeb Kurth-Nelson, Charles Blundell, and Demis Hassabis (2019).

If you want to learn more about deep RL, you should check out the following free educational material:

Building a neural network from scratch with NumPy is a great way to learn more about NumPy and about deep learning. However, for real-world applications you should use specialized frameworks — such as PyTorch, JAX, TensorFlow or MXNet — that provide NumPy-like APIs, have built-in automatic differentiation and GPU support, and are designed for high-performance numerical computing and machine learning.

Notes on RL and deep RL

How to set up video playback in your Jupyter notebook